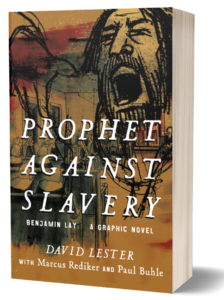 The revolutionary life of an 18th-century dwarf activist who was among the first to fight against slavery and animal cruelty.

Prophet Against Slavery is an action-packed chronicle of the remarkable and radical Benjamin Lay, based on the award-winning biography by Marcus Rediker that sparked the Quaker community to re-embrace Lay after 280 years of disownment. Graphic novelist David Lester brings the full scope of Lay’s activism and ideas to life.

Born in 1682 to a humble Quaker family in Essex, England, Lay was a forceful and prescient visionary. Understanding the fundamental evil that slavery represented, he would unflinchingly use guerrilla theatre tactics and direct action to shame slave owners and traders in his community. The prejudice that Lay suffered as a dwarf and a hunchback, as well as his devout faith, informed his passion for human and animal liberation. Exhibiting stamina, fortitude, and integrity in the face of the cruelties practiced against what he called his “fellow creatures,” he was often a lonely voice that spoke truth to power.

Lester’s beautiful imagery and storytelling, accompanied by afterwords from Rediker and Paul Buhle, capture the radicalism, the humor, and the humanity of this truly modern figure. A testament to the impact each of us can make, Prophet Against Slavery brings Lay’s prophetic vision to a new generation of young activists who today echo his call of 300 years ago: “No justice, no peace!”