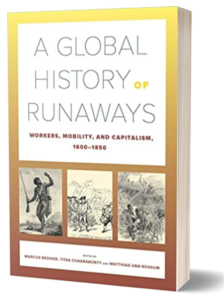 Edited by Marcus Rediker, Titas Chakraborty, and Matthias van Rossum. From the University of California Press. During global capitalism’s long ascent from 1600–1850, workers of all kinds—slaves, indentured servants, convicts, domestic workers, soldiers, and sailors—repeatedly ran away from their masters and bosses, with profound effects. This collection of essays compares and connects runaways in the British, Danish, Dutch, French, Mughal, Portuguese, and American empires. Together the authors show how capitalism required vast numbers of mobile workers who would build the foundations of a new economic order. At the same time, these laborers challenged that order—from the undermining of Danish colonization in the seventeenth century to the igniting of civil war in the United States in the nineteenth.