The Quaker Dwarf Who Became the First Revolutionary Abolitionist 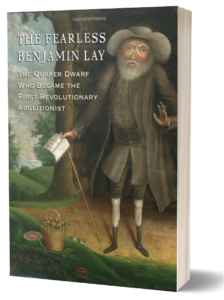 The little-known story of an eighteenth-century Quaker dwarf who fiercely attacked slavery and imagined a new, more humane way of life

The Fearless Benjamin Lay chronicles the transatlantic life and times of a singular and astonishing man—a Quaker dwarf who became one of the first ever to demand the total, unconditional emancipation of all enslaved Africans around the world. He performed public guerrilla theater to shame slave masters, insisting that human bondage violated the fundamental principles of Christianity. He wrote a fiery, controversial book against bondage that Benjamin Franklin published in 1738. He lived in a cave, made his own clothes, refused to consume anything produced by slave labor, championed animal rights, and embraced vegetarianism. He acted on his ideals to create a new, practical, revolutionary way of life.

The Fearless Benjamin Lay has been translated into French, Italian, Korean (coming), and Spanish (coming).

The Fearless Benjamin Lay is also available as an audiobook.