An Atlantic Odyssey of Slavery and Rebellion 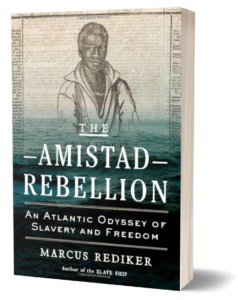 On June 28, 1839, the Spanish slave schooner Amistad set sail from Havana on a routine delivery of human cargo. On a moonless night, after four days at sea, the captive Africans rose up, killed the captain, and seized control of the ship. They attempted to sail to a safe port, but were captured by the United States Navy and thrown into jail in Connecticut. Their legal battle for freedom eventually made its way to the Supreme Court, where their cause was argued by former President John Quincy Adams. In a landmark ruling, they were freed, and eventually returned to Africa. The rebellion became one of the best-known events in the history of American slavery, celebrated as a triumph of the legal system in films and books, all reflecting the elite perspective of the judges, politicians, and abolitionists involved in the case. In this powerful and highly original account, Marcus Rediker reclaims the rebellion for its true proponents: the African rebels who risked death to stake a claim for freedom.

Using newly discovered evidence, Rediker reframes the story to show how a small group of courageous men fought and won an epic battle against Spanish and American slaveholders and their governments. He reaches back to Africa to find the rebels’ roots, narrates their cataclysmic transatlantic journey, and unfolds a prison story of great drama and emotion. Featuring vividly drawn portraits of the Africans, their captors, and their abolitionist allies, he shows how the rebels captured the popular imagination and helped to inspire and build a movement that was part of a grand global struggle between slavery and freedom. The actions aboard the Amistad that July night and in the days and months that followed were pivotal events in American and Atlantic history, but not for the reasons we have always thought.

The successful Amistad rebellion changed the very nature of the struggle against slavery. As a handful of self-emancipated Africans steered their own course to freedom, they opened a way for millions to follow. This stunning book honors their achievement.

Winner of the Homer D. Babbidge Book Award, Association for the Study of Connecticut History.

The Amistad Rebellion has been translated into French, Italian, and Swedish, and published in a different edition in the UK.

The Amistad Rebellion is also available as an audio book.