Atlantic Pirates in the Golden Age 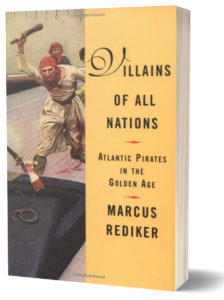 “Made up of all nations, and attacking the commerce of the world without respect for nation or property, pirates produced a strange and fascinating drama, an eighteenth-century morality play full of overlarge characters, complicated plots, twists and turns, and even unexpected outcomes.”

Villains of All Nations explores the “Golden Age” of Atlantic piracy and the infamous generation whose images underlie our modern, romanticized view of pirates. Award-winning historian Marcus Rediker focuses on the high seas drama of the years 1716-1726, which featured the dreaded black flag, the Jolly Roger; swashbuckling figures such as Edward Teach, better known as Blackbeard; and the unnamed pegleg who was likely Robert Louis Stevenson’s model for Long John Silver in Treasure Island.

This novel interpretation shows how sailors emerged from deadly working conditions on merchant and naval ships, turned pirate, and created a starkly different reality aboard their own vessels. At their best, pirates constructed their own distinctive egalitarian society, as they elected their officers, divided their booty equitably, and maintained a multinational social order.

This unprecedented social and cultural history of pirates proves that the real lives of this motley crew – which included cross-dressing women, people of color, and the “outcasts of all nations” – are far more compelling than contemporary myth. Pirates challenged and subverted prevailing conventions of race, class, gender, and nation, posing a radical democratic challenge to the society they left behind. They dared to play the rebellious villain on a floating international stage. The authorities hanged them for it, but the pirates triumphed in the end, winning the battle for the popular imagination in their own day and in ours.

Villains of All Nations has been translated into French, Italian, Japanese, and Swedish.

Villains of All Nations is also available as an audio book.