Sailors, Slaves, Commoners, and the Hidden History of the Revolutionary Atlantic 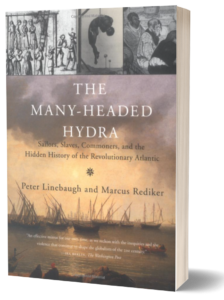 Long before the American Revolution and the Declaration of the Rights of Man, a motley crew of sailors, slaves, pirates, laborers, market women, and indentured servants had ideas about freedom and equality that would forever change history. The Many Headed-Hydra recounts their stories in a sweeping history of the role of the dispossessed in the making of the modern world.

When an unprecedented expansion of trade and colonization in the early seventeenth century launched the first global economy, a vast, diverse, and landless workforce was born.

These workers crossed national, ethnic, and racial boundaries, as they circulated around the Atlantic world on trade ships and slave ships, from England to Virginia, from Africa to Barbados, and from the Americas back to Europe.

Marshaling an impressive range of original research from archives in the Americas and Europe, the authors show how ordinary working people led dozens of rebellions on both sides of the North Atlantic. The rulers of the day called the multiethnic rebels a “hydra” and brutally suppressed their risings, yet some of their ideas fueled the age of revolution. Others, hidden from history and recovered here, have much to teach us about our common humanity.

The Many-Headed Hydra has been translated into Italian, Korean, French, Portuguese, German, Spanish, and published in a different edition in the UK.